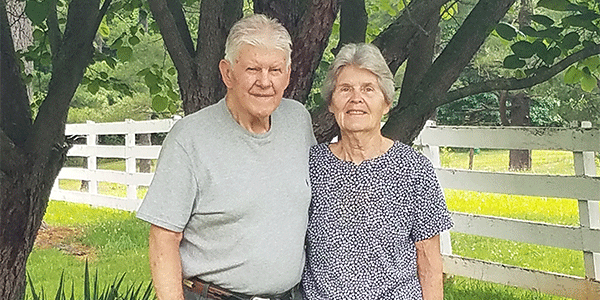 Peggy and Terry Carroll recently shared with Saint James School that they were choosing to leave their family farm to the school as part of their estate plan. Because of their long history with the school, the Carrolls trust that Saint James will steward their family's land with faith and integrity.

Mrs. Carroll had long known about Saint James. Father Owens, the beloved former headmaster of Saint James School, often stopped at her father's filling station and occasionally did business with him. Through Father Owens they learned that Saint James was a good school with good people.

When Terry and Peggy's son Lance grew old enough, the decision to send him to Saint James was a simple one. Lance had come to know Chick Meehan and Don Woodruff through sporting events held at the school and felt very comfortable around campus. During his time at Saint James, Lance thrived in the school's challenging academic and athletic programs. The Carrolls still fondly recall Lance playing against the top high school basketball program in the country, Flint Hill, at the SJIT. Lance was a competitive and hard-working athlete who relished competition and the comradery of his teammates.

Saint James was more than just an academic and athletic experience; for the Carrolls, the school felt like family. They enjoyed being with other parents at mixers, cheering on students at games, and getting to know the faculty and coaches. The Carrolls shared a story about a time when this family approach to education had a real impact on their son. Lance had hyperextended his wrist just before an important football game. Mr. Meehan told Lance he wouldn't play to avoid further injury. Lance knew he could. After consulting with his father, they approached Mr. Meehan and explained the situation. Lance and Mr. Carroll's word was good enough for Mr. Meehan and Lance played well. The Carrolls believe that experiences like this gave Lance the skills and confidence he would need to succeed in life.

The Carrolls are generous supporters of the Annual Fund as a way of showing their appreciation for what Saint James School did for Lance. Their gift of the farm was a more personal matter. The Carrolls are great lovers of the outdoors; Mr. Carroll particularly, is an avid hunter and sportsman. They both want the rustic beauty of their land and the surrounding area to be preserved. After many conversations with Father Dunnan, it became clear that Saint James could help. Because of their generosity and foresight, the Carrolls will achieve their goal of preserving the natural beauty of their farm while simultaneously supporting the future of Saint James School.