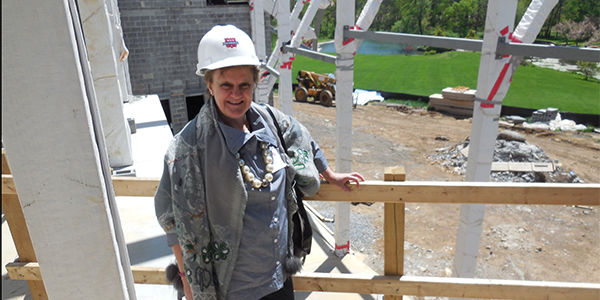 Mrs. Barbara Funk Dolson '84 recently made the decision to make a bequest for Saint James School as part of her estate plan. Barbara believes that Saint James School prepared her for her life and career. At Saint James, Barbara says she learned the study habits, the ability to break down a project, and time management skills that became the foundation for success in college, graduate school, and her professional career. Barbara says that she connected with the school. "I found a sense of belonging [at Saint James], everyone wants that."

Her first experience with Saint James was with her Godfather's son, Mr. John P. Psillas '76. The sense of pride and purpose she saw in John, who served as Senior Prefect, made a tremendous impression. "I want that!" she thought to her ten-year-old self. Barbara's parents agreed, and she enrolled at Saint James four years later.

Barbara has many fond memories of her time at Saint James School: meeting Nancy Reagan at the White House Easter Egg Roll, visiting the Washington National Cathedral, and having Mr. Hoyer count the laps students walked around campus to work off demerits earned in the preceding week. Mrs. Dolson earned just two demerits during her five years at Saint James; the girls had a very strict dress code, and she had worn the wrong color sweater. She laughed recounting the story, "It couldn't have been very noticeable because I had to point out to Father Owens at lunch that I had worn the wrong color!"

Barbara explained that when her career was just getting going, and she had small children, it had been difficult to travel to Saint James from her home in Florida. It was the fact that her classmate was traveling internationally from Saudi Arabia to attend Alumni Weekend that prompted her to return. Though initially nervous, she felt very welcome. Barbara assures fellow alums that "you can pick up at any point; there doesn't need to be a particular time [to return]. There is always someone [at Saint James] to connect with. It might be a teacher, a former classmate, [or] new Saint James friends."

Barbara and her husband both support the Annual Fund because Saint James laid the foundation for her adult life, and they "want to ensure that the school can continue to do for students today what it did for her."

Barbara felt she wanted to do more. She loved Father Owens and his legacy. She has also admired Father Dunnan and the way he has carried that mission forward. Making a gift through a bequest in her will allows Barbara to make a bigger impact than she otherwise could. Barbara hopes that her bequest to the Saint James School general endowment fund will help the school endure whatever the future brings; that in "another 100 years the school is still Saint James [and] the mission of the school is still an active, going concern."